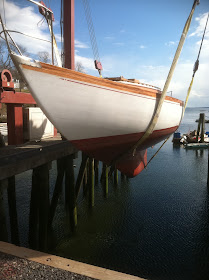 Ideally, custom boats are built to perfectly express and mold to the character of the person using them. In the case of GYRE, a restoration we began in the fall, we faced a different challenge: shaping an existing boat to meet a client’s needs. Our client bought a used, wooden cruising boat and asked us to transform her into a comfortable daysailer. To this end, the cabin house was cut back by a few feet. 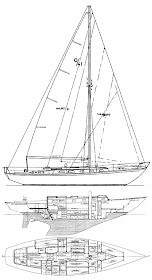 GYRE is a sturdy, ocean-going cruising boat, originally crafted to meet to requirements for the Bermuda Race. Designed by prominent Swedish designer Einar Ohlson, she, like other Ohlson vessels, is a production boat. She was built in Denmark by Paul Molich, a respected builder and designer in his own right. The boat is built with edge-glued single planking stiffened with intercostal plywood, an inner layer of plywood laminations between the frames. Her oak frames are comparatively light when compared to other wooden boats of her era. There are several other handsome Ohlson designs in these waters, notably DULCINEA, cared for at this yard, and KRISTIN, a frequent winner of the Eggemoggin Reach Regatta.
The current owner of GYRE bought her with the intention of sailing off of Cape Cod with a sprawling extended family. Although the boat was originally designed for off-shore sailing, and was equipped with a galley and bunks for six, the new owner envisioned a boat with no galley, but room for coolers for sandwiches, and maybe a coffee maker. He saw a large expanse of cockpit and deck, free of toe-stubbing do-dads, clear for lounging and sunbathing. He saw lazy summer afternoons with a platoon of kids and teenagers, and maybe some light-hearted racing between family members.
The sorts of changes the owner proposed can be controversial in wooden boat circles. To varying degrees, some people view wooden boats as heirlooms or art objects, and therefore fixed in form and detail. Rockport Marine, for example, has an agreement that allows us to construct Nielsen boats… so long as the exterior profile of the vessel remains exactly as Nielsen drew it.
It makes sense, especially for some of the true classics—if we buy a painting by one of the old masters, we don’t add a few strokes of color so the painting will match the wallpaper in the bedroom. Some wooden boats are in this category; SPARTAN, for example, the only remaining New York 50 designed by Herreshoff, was restored by McClave, Philbrick and Giblin (MP&G) to be as close to the original as possible. This boat is a piece of yachting history, and owning it comes with a responsibility of stewardship. But the other side of the coin is that boats are essentially utilitarian objects, adapted to our individual purposes. The owner of GYRE sees the boat in this second way, with very clear ideas about how the boat will be used, which drove most of the restoration decisions.
In order to accommodate this vision, project manager Eric Sewell and carpenters Phil Finck and Glenn Pease cut back the cabin house by several feet which eliminated space below for overnight passages, but allowed them to increase the size of the cockpit considerably. The teak deck was in poor condition, so they removed the old deck, repaired the deck framing and installed a new plywood laminate deck in its place. They covered the plywood with a polyester cloth called Dynel, which has a weave similar to traditional canvas, and when finished, has an attractive, non-skid appearance.
Eric and his crew repaired the cabin house and stripped the cabin sides of their varnish—they will be refinished when the boat goes up to one of our paint bays. Glenn built a flush-mounted forward hatch with an ingenious system for draining water from the gutters:
And everything else on the deck was laid out and designed for the minimum amount of toe-stubbing, and the maximum amount of space for relaxing. The traveller for the main sheet was removed to clear space back aft and the main sheet will now run from a single, reinforced spot in the cockpit.

In addition to the new deck, the crew also addressed structural issues in the transom and shear plank. They reinstalled the Perkins diesel engine and installed a simple DC electrical system that would be enough to charge a couple of iPads, make coffee, power some lights and start the engine. 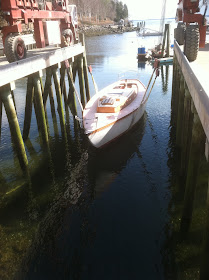 GYRE goes into the water today to swell up for a week before she goes up to the paint department for finishes. After that the transformation will be complete: from Bermuda Race qualified off-shore vessel to relaxed family daysailer.

I personally love the thought of GYRE schlepping a dozen kids around on a hot summer day, maybe anchored off some island while the kids swim and the adults take naps in the sun. That seems, to me at least, exactly the point of all this.